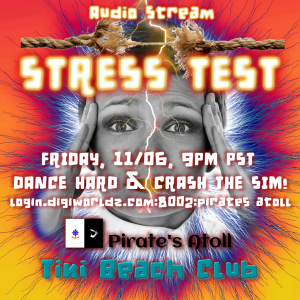 I’m getting closer to a grand opening of the Tiki Beach Club on Pirate’s Atoll (since moving to Digiworldz). I have set up a new shoutcast server, and I want to see if it can handle some hard-dancing avs! So this Friday (11/6/15), Everyone is invited to dance their av off to some fast beats and solid tunes! 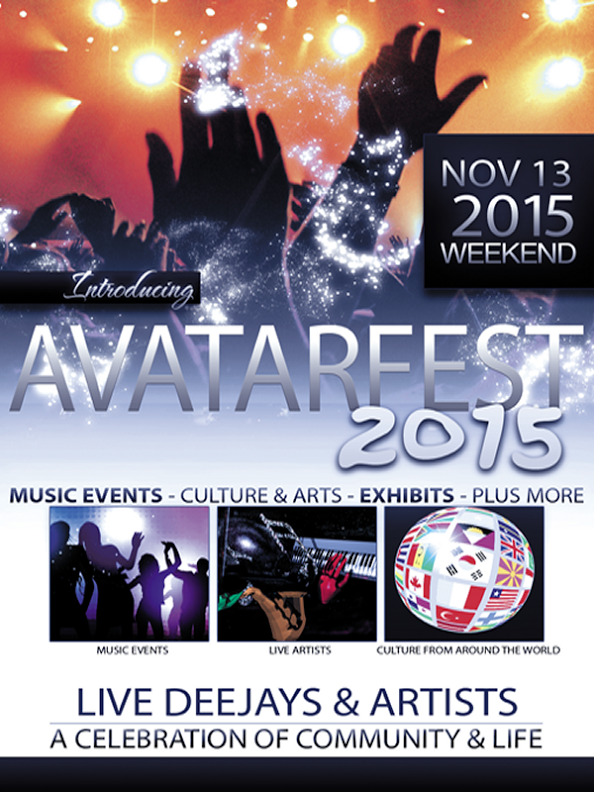 The word on the virtual street is that the Open Simulator Community Conference will be reduced in scope this year and will be later.  We had so much fun at the Conference and After-Party last year, that I am already ramped up to do some sort of major DJ event this November, and it looks like AVATARFEST will be the venue.

After being a standalone region grid for a year or more, we have decided to join a grid. We have had a few successes as a standalone, first run by me on a VPS, and secondly hosted by Oliveira Lands, where Fernando Oliveira did probably a lot more work than he bargained for in keeping up with the demands of a busy standalone! If you are looking for hosting that connects you to an open grid such as OSGrid, he is highly recommended.

As the demands of the sim grew, I decided that it was time to join a grid. Some of the reasons for DigiWorldz:

I now have some expansion room for a surfing/sailing zone, plus room to add things such as a Honky Tonk and some larger buildings. The region is already up (login.digiworldz.com:8002:Pirates Atoll), and as soon as a few things are fixed, I will have some sort of grand reopening.  But you can visit now!
Edited with BlogPad Pro

Most of the hypergrid discussion has been on Google Groups, with a few more specialized (and tightly controlled) groups on Facebook.  I aim to change that. Unless there is some sort of abuse, this group will be a wide open place to post anything related to hypergrid events, places, people, etc.  Join Today! 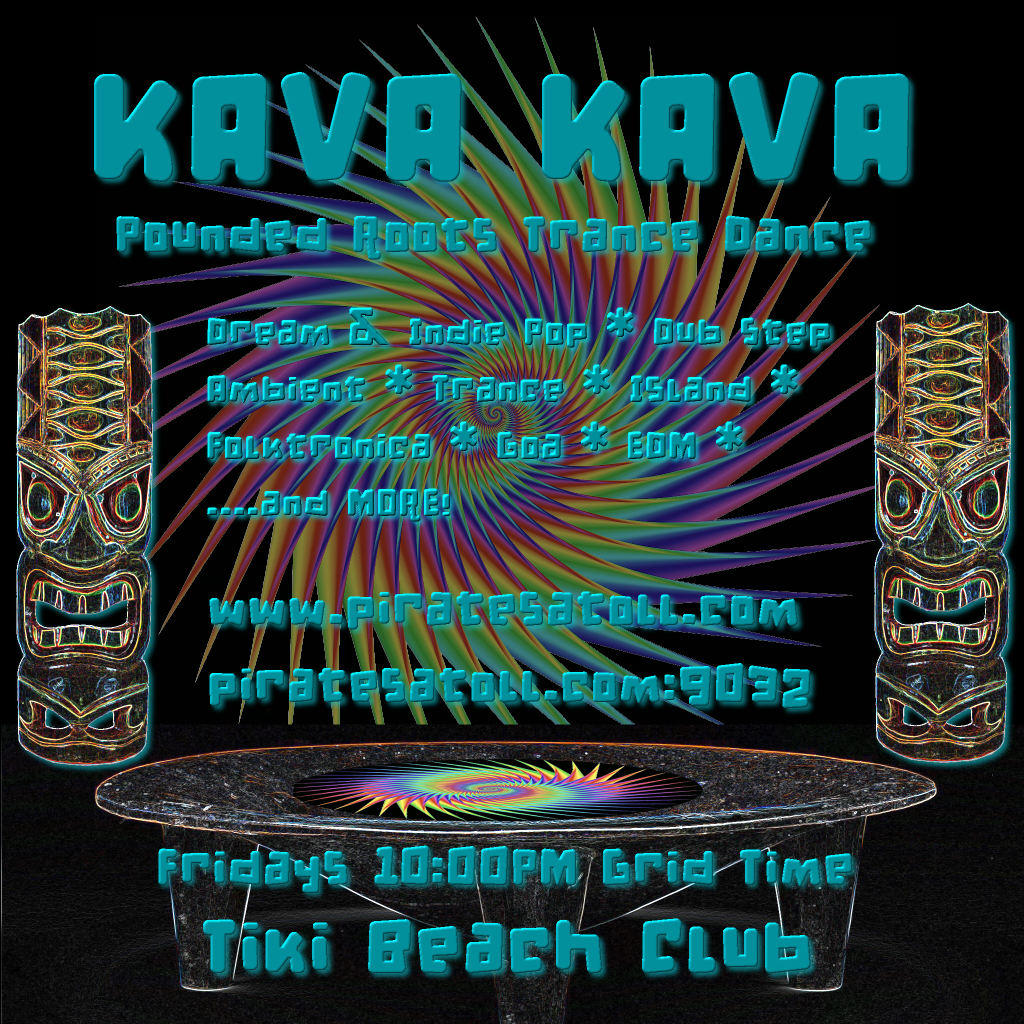 DJ Strannik Zikr spins an eclectic set of beats and tunes for dancing at the beautiful Tiki Beach club, under the stars or a setting sun on most Fridays at 10:00PM (SLT/Grid Time).

Just as Pacific Islanders have conducted Kava ceremonies from ancient times in order to experienced a relaxed oneness with their environment and each other, KAVA KAVA also uses “pounded roots” to transform the night to a joyful experience of relaxation and rhythm.

We’ll go at least two hours or until the energy runs out.

You can confirm which dates are happening on the calendar.  See this page on how to get to Pirate’s Atoll, and then use the teleporter in the train station or TP using the big Kava Kava poster to get to Tiki Beach.  Events are also listed on Opensimworld.

Pirate’s Atoll is now listed on OpenSimWorld. The one piece that has been missing from the Hypergrid has been a listing of locations and events with real time data.  Hyperica has been a great list, but with Maria having to do all of the work, it is hard to keep up to date or add grids or events on the fly. Google Plus groups have helped, but with OpenSimWorld, you can look at the website, in-world beacon or hud and get a real time listing of grids if they are running, and how many avs are present.

There is also an event calendar that allows sim owners to instantly list their events.  If this site doesn’t become abandonware like so many others, it ought to be a great Hypergrid resource.

They have an “office” in OSGrid where you can get your own copy of the beacon and hud: hg.osgrid.org:80/OpenSimWorld

The dream for me has been to use Opensimulator for meetings, conferences and collaborative work sessions. Some of this happens, like last year’s Open Simulator Community Conference, which in my mind was a success in showing off the conference capability of Open Sim. That conference required a little bit of patience with bridging applications (e.g. Skype), and it worked because the target participant/audience was already familiar and invested in Open Sim.  To host a conference in an Open Sim World for non-technical or unfamiliar folks would be a disaster. I could not ask clients or vendors to meet with me this way, as the headache factor would simply be to high, and I don’t like making people upset without reason. A virtual conference for the uninitiated and untechnical needs to be as smooth as silk with no hurdles to cross.

The result was to find a virtual conference that presented no hurdles or headaches, and worked smoothly without requiring training or downloads.  There is a lot of web conferencing software that does this more or less, and works somewhere between OK and terribly. Enter Sococo Teamspace. 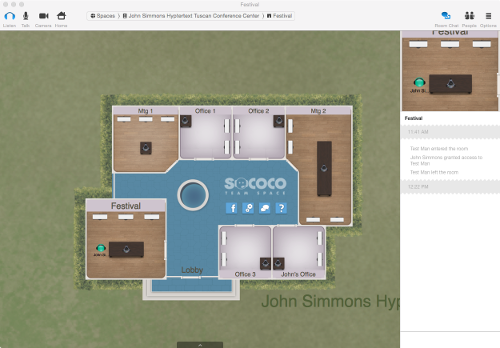 Sococo presents the best of both worlds: a conferencing and collaborative work solution that is easy and intuitive, and can be extended to guests via an easy web interface, while having some sophistication as a online conference with a virtual room/avatar metaphor. Unlike a web conference that is likely only to be fired up at definite meeting times, a Sococo virtual office is left on, with avatars hanging out in meeting rooms or their private offices.  This allows more of the “gotta minute?” spontaneous interaction of the water cooler type that Marissa Mayer was concerned about.

Each of the conference rooms and private offices or breakout rooms has several screens. Each screen can be used for sharing anything on the desktop as in most online conferences, but also can be set as a dedicated web app for use in the space.  You can set up your own app or choose one from a list that is ready to use, including several web based CRMs, Google Office, and developer apps.  Sococo is ready to go, easy to use, and ready for prime time as far as remote work is concerned.

It occurred to me that Sococo can also add a dimension to Open Sim as well. If Firestorm is the app that is shared on one of the screens, then a bridge can be created between a meeting in Open Sim and Sococo.  Out of the box, this would be passive viewing and listening for the Sococo participants, but it would not be hard to create and audio/chat bridge so that participants in both platforms can fully interact.  This would create an easy way to introduce neophytes to the meeting capability of Open Sim, and add 3D model interaction to the mix, a rich meeting without raising the bar on easy access.

UPDATE: It turns out that not only is it possible to access Opensim via a shared screen in Sococo, but it is also possible to access Sococo via a shared screen with MOAP in Open Simulator, except for shared screen mode in Sococo, which relies on Flash. The main thing slowing down conferencing and full scale MOAP solutions is the dumb webkit in Opensim Viewers.  It is planned that Second Life (which still drives what tech is used in viewers, even for Opensim), will be replacing the webkit with the Chrome Embedded Framework, which should bring MOAP up the level of modern browsers, and most sites.  This cannot happen soon enough for us!

Last fall, I wrote about the search for a decent currency that would work on Pirate’s Atoll and the hypergrid. I decided that it had to be bitcoin, and immediately implemented BTC ATMs (web links to blockchain wallet) and a BTC tip jar as an immediate step.  What I could not do is implement a full currency system.  There are scripts that I can use to sell items in-world, and it is already possible to have BTC based web sales, but the currency remained vaporware….until now.

Hypergrid business reported about YrGrid, which implemented the uBTC (micro bitcoin) currency, which is simply BTC in a smaller denomination like a Satoshi. Equally promising is the future use of Mumble for voice, which can be encrypted end to end (unlike Vivox which is NSA friendly).  It is a closed grid for now, but hypergrid access will be coming soon.  There have been no plans to opensource the uBTC currency system, but I am bugging some of the fine folks at YrGrid about doing just that, in order that it may one day become an inter-grid currency.

In the meantime, accounts on YrGrid are free, and easily funded from Podex or your Bitcoin wallet.  Check them out, and give one of those slot machines a spin!

Adam01Time of The Adam01Time Show, came to the Kava Kava Party on Pirate’s Atoll and shot some great video of the event.  He featured the atoll on his show last week, and I think there will be more coverage.  It is a great show for getting an overview of different places on the hypergrid. 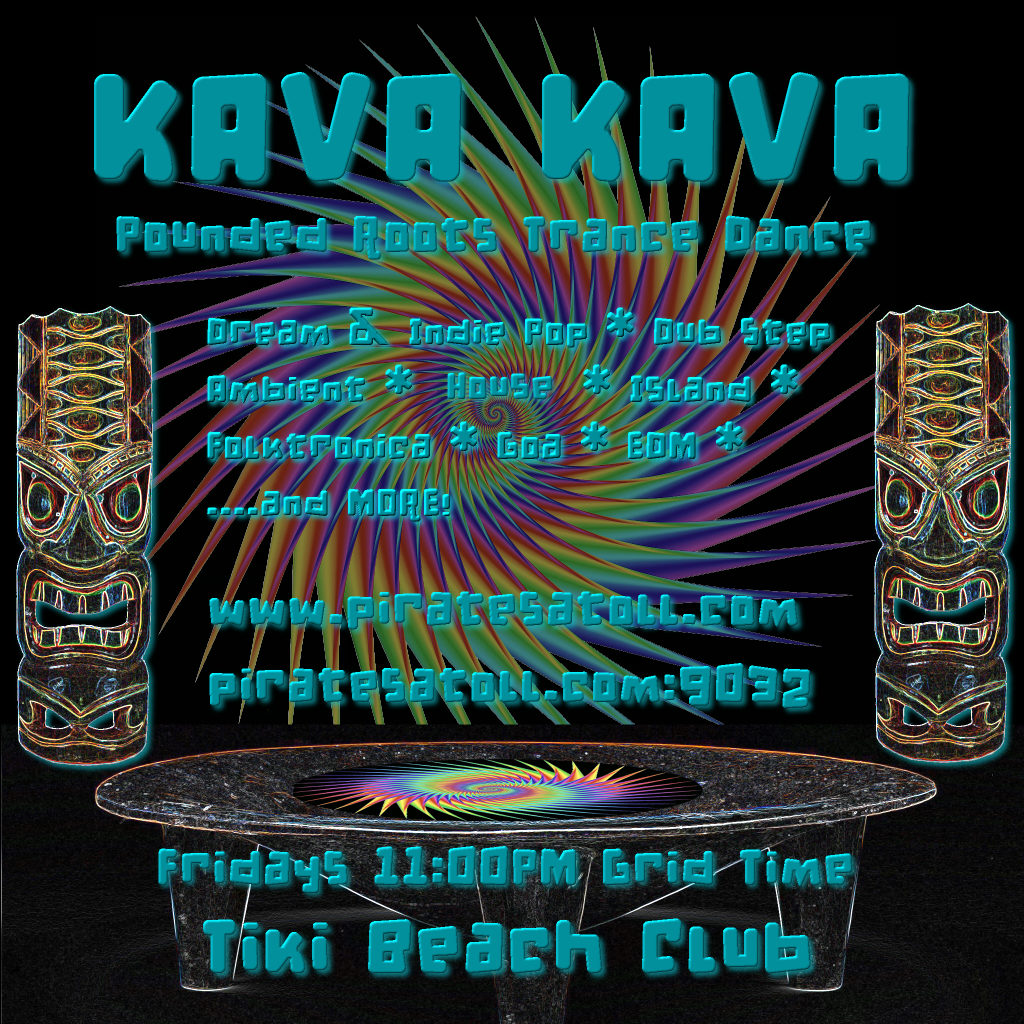 We will rock the beach with vibes from Strangeways Radio and SOMA FM, and possibly a few homespun tunes by DJ Strannik Zipper.  Deep into the night with deep house and more! Get on down to Pirates Atoll and head to Tiki Beach, Set your sun position to sunset or midnight and swing with the palm trees to deep tropical and pacific vibes.

Here is how to get here.